Self drive in the Maasai Mara - Everything you need to know

Back to Travel Guide Kenya

The Maasai Mara, or the Mara, as many in Kenya call it, is a beautiful national reserve in Kenya bordering the Serengeti in Tanzania. The Maasai Mara Kenya's wildlife is prolific and it has excellent opportunities for safari game viewing. The wildebeest migration which takes place every year is world famous. It includes the dramatic crossing of the Mara river by millions of migrating wildebeest, zebras and the trail of predators that accompanies them. During your self drive safari, this is easily a highlight.

Covered in this section:

The beauty of the Maasai Mara National Reserve

Think of Africa, and landscapes like the Maasai Mara are the first thing that come to mind. The Maasai Mara National Reserve will definitely be in your Top 3 as a highlight of your trip. Its landscape has a beauty that is unmatched: fields and fields of waving grass turning from yellow to green depending on the season. Full of rivers and other water sources, the wildlife is prolific, even off-season. The season starts with the start of the great migration, when millions of wildebeests, zebras and gazelles cross the border from the Serengeti to the Maasai Mara in search of fresh water, usually around June/July/August. The hooved crowd is followed by predators, such as lions, cheetahs, leopards and hyenas. But, even without the migration, these impressive animals are roaming the plains.

What is the best time to visit the Maasai Mara? Well, depends what you want: Wildebeest migration or Wilderness feel. Your preferences will guide you through the seasons:

In particular, the wildebeests crossing of the Mara river is something that many tourists are seeking to experience. You should keep in mind that this event is attended by many, many tourists every year. Unfortunately, this often leads to a bit of a traffic-jammy experience.

The sector with the least tourist is the Mara Triangle, especially the western part of it.

Seasonal river crossings can only be done with a vehicle that is high on its feet!
Besides, for some reason beyond our understanding, some of the roads leading to this tourism highlight are the worst roads you will experience while driving in Kenya.

The road between Narok and Sekekani Gate isn't half as bad anymore as everyone claims it to be. Half of it is tarmac now, and the other half is under construction. Most of it has already been smoothed out and broadened so even if it's still unpaved it's not as bumpy as one might expected it to be. The road to reach Oloololo gate from Narok is a lot bumpier (but very beautiful). We have good hope that these roads will greatly improve by the end of 2019.

Another dreadful section is the North-Western section near Mara Rianta.

Moreover, there are more arguments in favour of going with an experienced driver & guide that knows the park and understands the seasonal patterns of the animals. For a first-timer, it can be quite complicated to understand where to go and where to stay in the Maasai Mara. 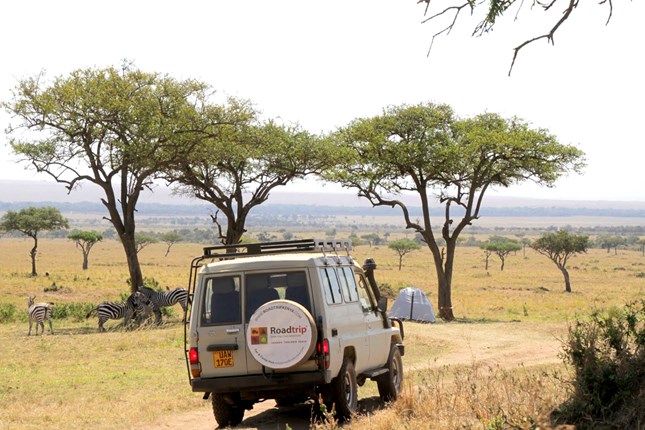 The greater Maasai Mara ecosystem is comprised of three large sections and a number of smaller private conservancies.

Conservation fees are updated/changed quite regularly, not always informing the tour operators accordingly. For the latest fees; best to look them up from the Triangle website directly.
Early 2019, fees were stated as follows:
- Non-resident - $80/24hours staying outside the park or $70 staying inside the park
- EA residents pay a steep reduced rate of 1200 KES (about $12)/24hrs - So if you are an expat in Kampala - this is the place to go!
- Safari Vehicle is 1000 KES (about $10)/entry. There is no extra charge for non-kenyan registered numberplates.

There are three public campsites in the Mara triangle: Oloololo, Eluai and Iseiya campsite. They operate on a first come, first served basis. Most of the time they are completely deserted and you have it all to yourself. You have to be completely self-sufficient though, as there are no facilities. You should also bring firewood, because you are not allowed to gather it there and then. The sight of the Mara plains from your rooftop tent when you wake up in the morning is magical. Great value for money!

"Camping in Mara Triangle is really great and I would highly recommend starting a self drive in the Mara Triangle, as it is more manageable and simpler to navigate than the main Masai Mara National Reserve. We camped in the public campsites and, although Eluai felt a litte exposed and we were on our own, it was great. Oloololo gives a bit more comfort and has facilities. Rangers incredibly friendly in the triangle and everyone willing to pass on game information, etc.'